We are in a Worse Real Estate Recession Than 2008,
But There is One Big Difference: Jobs...

We are currently in a residential real estate recession – and you heard it here first. We are technically in a worse recession than what we saw in 2007-2008 — from a transactional basis. But there’s a difference this time around… And that is, we are not losing jobs by the millions every month. But how does this affect the market? What does it mean, and how does it affect you — the consumer, the seller, the buyer? That’s what we’re going to talk about today…

But first, I have some great news to share with you! We have just opened our second location in Kaufman County in the growing city of Forney, right in downtown on Main Street. We are now more accessible and equipped than ever before to serve our Kaufman County clients! So please, let us know if we can help you – or anyone you know – with any of your real estate needs.

Sales volume last month decreased by 17 percent in the Dallas-Fort Worth Metroplex. We went from 10,081 transactions in September of 2021 to 8,300 transactions this year in September. The average sales price rose 10.72 percent. So right now, we are around that 10 percent mark and seeing a slow-down of price appreciation from those 30 percent levels that we had been seeing just up until a few months ago. Months of Inventory also went up, from being around 1.3 months to 2.3 months. So, that’s nearly a 100 percent increase in inventory on the market as well…

BUT NOW, let’s talk about jobs. This is the big difference maker in what’s going on today and the big thing I want to talk about today.

There has been an increase in number of jobs available in D-FW and a major decrease in unemployment this past year. We went from 4.4 percent unemployment in 2021 to now a 3.4 percent unemployment rate. In addition, we have added 298,000 new jobs since this time last year – that’s pretty crazy. The market increased seven, almost eight percent. Year over year job growth typically hovers around just three percent, which just tells you the huge migration of people coming to this area from all over the nation continues. So, that’s the big question mark and factor to weigh in regarding what this real estate market actually looks like right now and how you will be affected by it.

We are also seeing the first decline in home building since 2011 when looking at permits and new construction. Home starts fell by one-third since 2021. So, this all means there is even less inventory coming onto the market in D-FW right now.

This makes four months now that we have seen this major slowdown in residential real estate and the number of closed transactions. This month, we are down another 17 percent year over year. Two quarters in a row is considered a recession – so, we are in the midst of a real estate recession right now, guys. And it’s worse from a transactional standpoint than what we saw from 2007 to 2008.

The difference from then to now, however, is what I said above. We have jobs. And we aren’t’ losing jobs, so people aren’t having to move and sell their homes. So, the inventory of homes coming onto the market right now is just not happening because we have plenty of jobs and steadiness there. So, how does that affect everything? Let’s dig in on a micro-basis and discuss this further.

Rockwall County is up 9.4 percent, Kaufman is up 11.2 percent, Hunt is up 15.4 percent and Dallas County is up 9.1 percent on average sales price.  I will still tell you I believe we will not be seeing a correction in price appreciation. And even if we do, it will be very little.

We still need to get to a more normalized price appreciation, however, of closer to 4 percent, before we start seeing transactions pick back up. The sellers are keeping their prices higher still and that’s what really has brought our market to a stall worse than what we saw in 2008 and 2009.

But it’s a different type of worse. It’s not necessarily worse for you, the consumer, other than if you want to make a move right now… You still have a job, you’re just staying put for the most part… The consumers are in general, are doing great. It’s the brokers, people like me, it’s the agents that are having a hard time. We are seeing virtually no transactions, in essence, compared to what we were seeing last year at this time.

So, that’s the big pain, if you will… Believe it or not, 20 percent of real estate agents have now exited the market and industry since this all started. So, this means you will have less real estate agents around. But hopefully for you, it will bring in more quality people to serve you over the long-term — and that’s what we’re looking at doing here at M&D Real Estate. 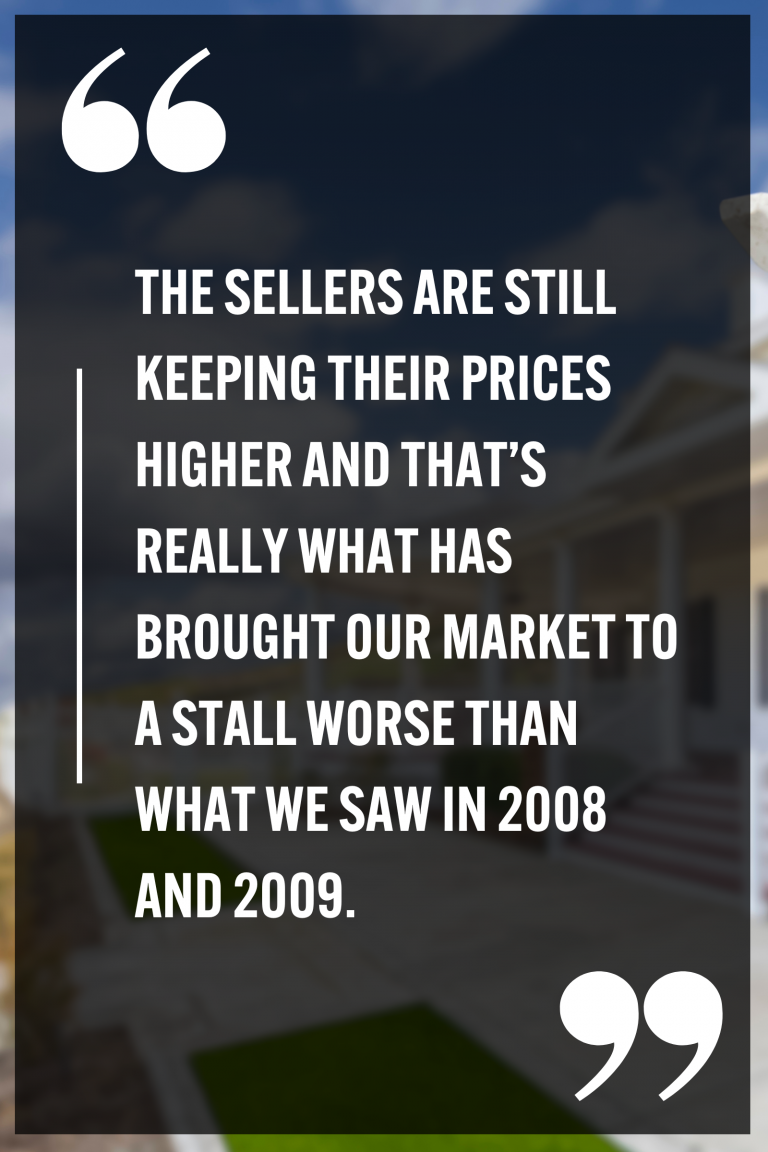 We are seeing about the same numbers here as we are with average sales price, about 10 percent up everywhere except Hunt County, which is at 17 percent (where there is a lower price point and still in higher demand). 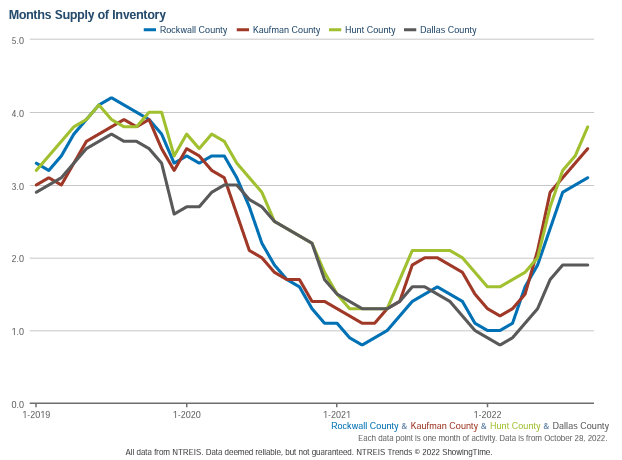 Number of Homes For Sale

We do not have inventory to sell right now. In a recessive market, where you’re not getting as many deals done, you typically see prices come down (which we have seen), but then you also usually see inventory flying in left and right because people are losing their jobs, too.  And then the inventory goes through the roof, which really serves to bring prices down to those corrective numbers… Instead, we are just seeing a prolonged slow down since this is a different kind of real estate recession. And it’s because there’s still not much inventory. Number of Homes For Sale is up 80 to 90 percent in Rockwall, Kaufman, and Hunt Counties and up 14 percent in Dallas County. But even with these numbers, it’s still very anemic if you think of what we are comparing the numbers to – last year in 2021, when inventory was at extreme all-time lows already… So, because of the unique circumstances in this recession, no one can really tell you when and what it will look like coming out of this.

In number of new listings coming on the market, we are down 15 percent in Rockwall County, up 5 percent in Kaufman, up 25 percent in Hunt and down 4 percent in Dallas County. People are not selling, they don’t want to sell, and they do not have to sell…

Why would they? They would have an interest rate of 7 percent in some cases right now on the buying side. So, this is prolonging the recessionary environment. And again, the pain is still mostly centered on the real estate brokers and mortgage companies, entities like Zillow, etc. – all of these organizations are laying people off left and right during this time of difficulty and real estate recession.

Thankfully, I am proud to say that we are actually growing at M&D Real Estate because of how well diversified we are — and because our clients sticking with us. But we are still feeling the pain, don’t get me wrong. We’re feeling the pain of this huge shift worse than in 2008-2009 from a brokerage standpoint (again, not a consumer standpoint).

This is a leading indicator into next month – pending sales are down 27 percent in Rockwall, 20 percent in Kaufman, 16 percent in Hunt County and down 23 percent in Dallas County. Those are bigger drops in percentage of pending sales than what we saw from peak to peak during the Great Recession.

Closed Sales are down 18 percent in Rockwall, flat in Kaufman County at .3 percent, down 17 percent in Hunt (where there are more homes being built than there were just a year ago), and Dallas County is down 20 percent.

What I want to close this with is to really show you what is going on right now as far as comparing the real estate recession we are in today to the Great Recession. In looking solely at the number of closed transactions in Dallas, where the amount of homes hasn’t changed much in the last 15 years, you will see it is very eye opening. 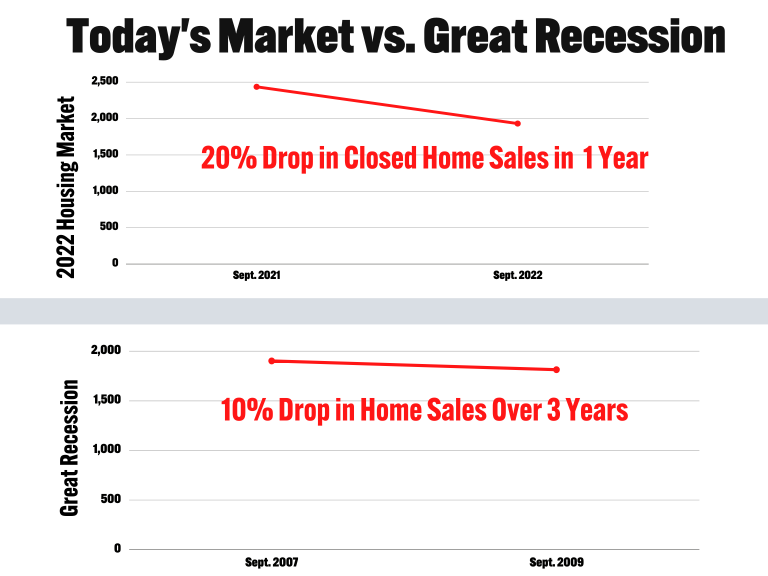 We have had a 20 percent drop in one year. So, we are seeing double what we saw in the Great Recession. Therefore, it is far worse for brokers and agents than what we saw then. But from a consumer perspective, you have jobs, so you are not losing your homes the way people were then, which is good. 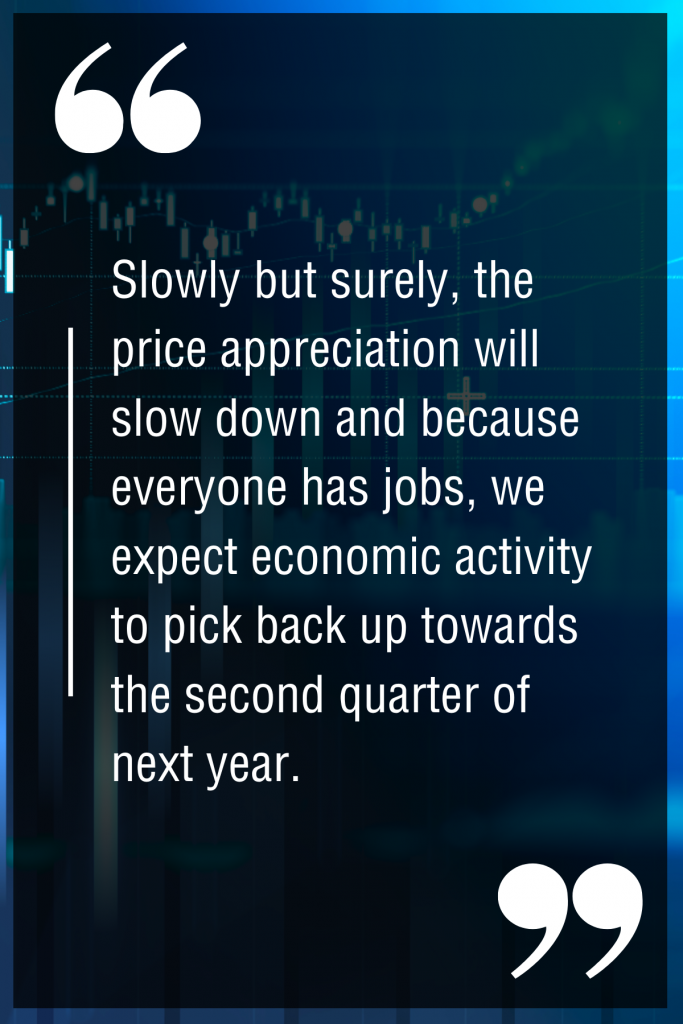 Slowly but surely, the price appreciation will slow down and because everyone has jobs, we expect economic activity to pick back up towards the second quarter of next year.

But it will be prolonged in how quickly we come back from this because we still have an inventory shortage.

And is housing going to get way more affordable? No, I don’t believe that is the case…because of the supply issue.

So really, you’re best opportunity to buy something could be over the next 3 or 4 months.Then, it will just get back to normal in how we buy — and homes will just continue to appreciate.

So, that’s the good news for you sellers. You might be looking at Zillow or home calculators about your home’s worth, and you’re not losing your equity. It’s just that growth is slowing down.

With that being said, please let us know if we can serve you here at M&D Real Estate.

We now have offices and teams in both Rockwall & Kaufman County, nothing but five-star reviews, and we are a full-service firm able to serve you whether you require residential, commercial or property management services!

Sign up for the latest news, updates and properties.

Leave your details, select your interest(s), and we’ll get you more information on how we can help.